Portland, the city that can’t just have one Santa Con. There are 3 every year so get ready. However so far in 2022 only two have announced their full dates and information. See the details below. One has gone dark.

Dress up! Some Portlanders are always looking for a reason to be angry so if you half-ass it and only wear a hat, you will have people talk trash throughout the day. Some groups may even ban you. They say they are a full participation event. No onlookers.
Buy a full Santa Suit on Amazon.

Date: December 17th, 2022, Saturday 4pm-10pm+ Buy $25 Wristband(Required)
Meeting Place: Ankeny Alley, SKidrow. FaceBook Event Page.
Public Transportation: Downtown, all kinds of Max around. Mostly walking around the area once you arrive.
Cause? Getting crunk in Santa Suits!!!
Description: This is the biggest and most promoted Santacon. So far the only official announced Santa Con for 2022.
After Party? This one ends with a street party in Portland’s old town entertainment district. Drunk Santi everywhere.

HO Ho Ho,
Stumptown SantaCon is an organized Fundraising event. Since we started in 2011, we have raised over $100,000 for the Sunshine Division, Planned Parenthood, the NW Bartenders Association and Feed One Haiti, among others. This year we have 22 participating venues and a Live DJ’d Street party on SW 3rd Ave at Ankeny Alley.
This is a chance to get together after so many months in lockdown to have fun and celebrate the season.

We practice the Four F*s of SantaCon:

If your intention is to “Get Crunked in a Santa Suit” you will be asked to leave.

Maybe they think getting crunk is a bad thing but this is their stance. Or maybe they are just so Portland that they can only put a negative stank on my Oakland way of speaking. GET CRUNK SANTI! WHO-RIDE!

Date: Saturday December 3rd Official Facebook Event Page
Meeting Place: Nite Hawk
Public Transportation: Kenton Station
Cause? They claim this Santa Con is serving the purpose of bringing people to North Portland to check out the neighborhood. Which is funny because I see so many stay out of NoPo like comments online and anti-gentrification fights that hate things like this. Me? I say the cause is to go get wasted with a bunch of people in Santa Suits. One good thing is they promote people bringing toys for an annual toy drive but I haven’t seen any results or information released as to how successful that has been.
Description: I would say this is the smallest of the 3 being all the way up in NoPo and being all spread out among miles but I think I also had the most fun at the North Portland Santa Con. One of my favorite stops was the place where everyone was drinking outside and playing Twister.
Website. Very outdated, no no information. 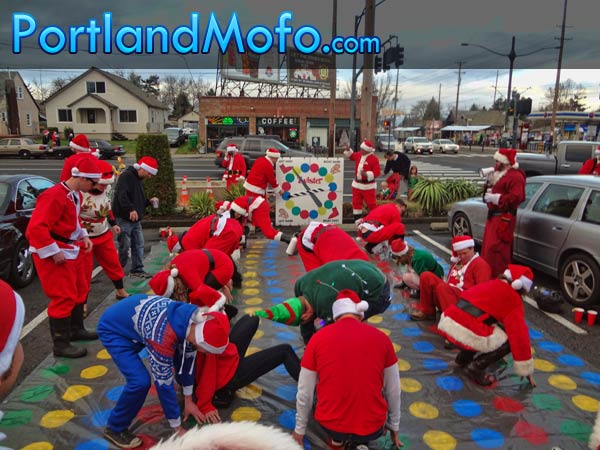 Date: Not yet announced. FB Page
Time: Usually between 3pm-11:30pm but they are MIA the last few years.
Meeting Place: The normal Santacon meets at the Skidmore Fountain downtown. But location may be announced later.
Public Transportation: Downtown, all kinds of Max around. This one will take field trips so buy a day pass.
Cause? This pub crawl claims to be a lot more than just a bar crawl but I’ll tell you what, it’s just a massive pub crawl.
Description: You gotta be careful with these guys. One recent year they bailed on downtown and didn’t tell anyone they were taking a 45 minute Max ride to Gresham leaving random Santa’s stranded all over downtown looking for each other.

Bring Cash!!! You do NOT want to try to use a card in a bar with this many people but also most bars ban cards during this bar crawl because there is just too much work involved in hundreds of open Santa bar tabs.

Dress Warm. It’s Portland. It is cold and rainy during these events.

Buy a Max ticket. You can get an all-day pass for $5. Often times these events span out over large areas and you end up on a bus or a Max and you shouldn’t be driving here anyways. Use public transit. TriMet is your friend. Sometimes.

When and where did Santacon start?
Back in 1994 a group of people by the name of the San Francisco Cacophony Society started Santarchy or a Santa Rampage in San Francisco. It basically meant the same thing it does now. As many people as possible getting together wearing cheap Santa Suits and running around from bar to bar drinking. The San Francisco group visited their buddies in Portland and started the first Santa Convention and the Santa Con tradition has carried on ever since. This group also claims they started Burning Man, Flash Mobs, Fight Club and more. Bottom line is some say Santa Con started in 1994 under the original name in San Francisco and Portland people claim it started here in 1996 when the name changed but the same idea was upheld.