Portland has its very own local Military Fighter Jet Squadron, the Redhawks. You often hear them and then see them flying over the city.
Illustration (check the tail wing)

Quick Links
Flight Radar 24 – Check what planes are currently in the air over Portland. Note this site will not show fighter jets but may show helicopters, refuelers, transports and all civilian aircraft.

ADSB Exchange – This site will show many military aircraft. You must use a desktop, launch the link and click the U in the top right to filter military craft

I recall my first visit to Portland and hearing a very loud, obvious military jet, something I was not used to in the Bay Area unless one of the local teams made the Playoffs(then they buzz the stadium). I thought to myself, holy hell, what is happening?!?! Ran to the window and there they were, beauts. Four F-15s mobbing across the city sky for no reason. Amazing! Excite! This kind of stuff brings out the super excited big kid in me. Airshows have always been my favorite thing. I used to put together model airplanes(special Oregon edition available on Amazon[ad]), I even went to the Sierra Academy Of Aeronautics in Oakland to become an aircraft mechanic. The bottom line is, you can imagine how excited I was to hear and see these beasts over Portland. Little did I know at the time that it was a very common thing to see fighter jets over Portland. So I looked further into it to explain why you often hear military jets flying over our lovely city. I got the idea because I always see people posting in Facebook groups asking why there are jets right now(they don’t know how to research).

What Military Planes Fly Over Portland?

The most common jets over Portland are McDonnell Douglas(currently Boeing) F-15C Eagles. A classic Air Force champion of the sky. These F-15’s fly out of the Portland International Airport, also known as PDX, which is famous for it’s ugly carpet. PDX houses an Air National Guard Base(history), aka ANGB. This base is home to the 142nd Fighter Wing(history).

Difference between the F-15C Eagle and F-15E Strike Eagle?
The C is a single-seater built for maneuverability and air superiority, while the E Strike Eagle is a double seater built to carry bombs and strike ground targets.

What branch of the military flies in Portland?
They are not under the control of the United States Air Force as a standard F-15 Fighter Wing but instead are a “state militia” squadron. They are commanded by the State of Oregon Air National Guard. Unless, of course, an order is given by the President of the United States. In that situation, they return to the standard USAF Air Combat Command Unit.

Why do they always fly F-15s in Portland?
They are on alert! They are part of the Pacific Theater Aerospace Control Alert (ACA) here in the Pacific Northwest, and they provide ACA 24 hours a day, 7 days a week, for the entire region from Northern California to British Columbia. They’re part of NORAD (North American Air Defense). I’m surprised we don’t hear them more. They defend the whole upper West coast from the boogeyman all year long. 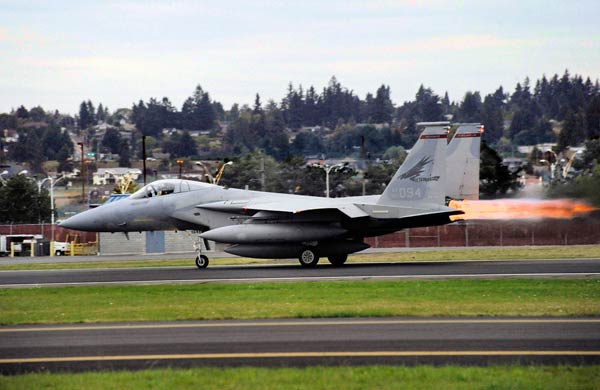 Shown is a 142 FW F-15 taking off out of Portland International Airport(PDX). Source

From time to time, you may see a “large black military plane” over Portland, Oregon.
One, it is not “black.” It is standard military grey. Two, it is not really “large.” It is a KC-135 Stratotanker Refueler plane which is a military version of the Boeing 707. Our Air National Guard has them, and they fly circles when refueling jet fighters and are usually up to fuel them for special event flyovers. You can see one taking off from PDX here.

You can see many of them flying over the United States and the Middle East at any given time.

Now you’re just paranoid. There is no such thing. Move along.
Okay, I lied. PDX’s Air National Guard base also houses the 304th Rescue Squadron and they fly black helicopters over Portland. They look like Black Hawks but are actually “Pave Hawks.” These guys played a huge role in rescue operations after Mount St. Helens blew in 1980.

Other Military Aircraft Out of Portland?

It’s not all F-15 Eagles here at PDX. Occasionally, you will see other jets, airplanes, cargo carriers, and such flying in and out during routine military exercises and local airshows.

Other Military Aircraft Seen Over Portland 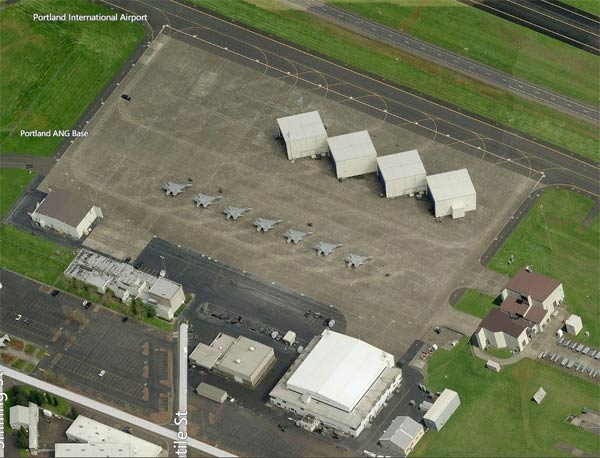 Unfortunately, I was unable to determine how many units are in this squad but here is an aerial photo showing 7 planes. Google satellite shows 8. We can assume at least one or 2 is out at all times.

It’s too bad you actually hear them a lot more than you see them because of all the cloud cover and rain in the fall and winter, but they are out there!

Random Facts (will be updated as I learn more)
One of the F-15s crashed off the coast during a training exercise back in 2007. The pilot Major Greg “Grumpy” Young, did die. [link]
Oregon also hosts Klamath Falls 173rd Fighter Wing at Kingsley Field, where pilots go to train to fly the F-15C. These guys are known as the… they don’t seem to have a name, but you can see how awesome they are here. They are not state militia like the Redhawks. They are run by the United States Air Force Education and Training Command. (AETC) MAJCOM. [link]